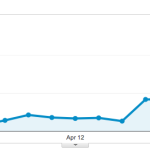 It's been a week since I fixed the issue on a site that had been infected by some malware. As I mentioned in my previous post, the malware was stealing the site's search engine traffic. And the graphs show very clearly how things have improved in only a few days: And if you look at that over the course of a week it's even clearer Hopefully (fingers crossed) there … END_OF_DOCUMENT_TOKEN_TO_BE_REPLACED

The .co launch started a few hours ago and seems to be doing very wellWe finally setup our own custom URL shortener, though I'm still trying to find a TwitterFeed alternative that will allow us to use our own shortener sanely. We're working on a bunch of different things over in Blacknight at the moment, so I'm looking forward to being able to talk about some of the final … END_OF_DOCUMENT_TOKEN_TO_BE_REPLACED

As part of my "let's use those domains" plan I finally put a new Home Cinema Discussion site live at the weekend.I picked up the domain about a year ago, but it had been sitting "gathering dust", so I'm happy to see it's now in use .. hopefully the site will get some traffic and attract a few active members in the coming weeks / months...Now where did I leave that list of … END_OF_DOCUMENT_TOKEN_TO_BE_REPLACED