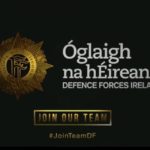 The Irish Defence Forces are currently running a recruitment campaign. What's different about it is that its focus is on women. They aren't just an afterthought or merely included, they're THE focus of the online campaign video: https://youtu.be/CTZr0G69WHk   The Irish Defence Forces aren't "huge" and unlike some countries our defence budget couldn't be described … END_OF_DOCUMENT_TOKEN_TO_BE_REPLACED