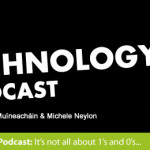 Conn and I have been trying to get a podcast series off the ground for the last while, but between one thing and another there's been loads of delays.. However we finally did manage to get something up and running earlier today - warts and all All feedback welcome (over there!) … END_OF_DOCUMENT_TOKEN_TO_BE_REPLACED

Although last year's trip to PodCamp in Kilkenny was a little more eventful than I would have liked, I've put myself down for it again this year.Events like PodCamp are a great way to "put faces to names" or simply catch up with a bunch of people who you normally wouldn't be able to see. As it's being held in Kilkenny I really don't have any excuse for not going, though I could … END_OF_DOCUMENT_TOKEN_TO_BE_REPLACED

Niall and I are in Kilkenny for the day at PodCampIreland. We should have got here about 10 am, but we ran into car issues, so didn't get here until after 11!There are several familiar faces in the room, but there's also a lot of new ones! … END_OF_DOCUMENT_TOKEN_TO_BE_REPLACED

The Nokia N95 is a thing of beauty. It's got all those funky features that every geek dreams of: GPS Bluetooth Wifi 3G MMS SMS Camera And you can make phone calls too !! It's also got a radio and a few other little gizmos that make it a fun piece of kit. Paul and I decided last Friday that enough was enough and that we'd simply buy ourselves new phones, so we did! It's a … END_OF_DOCUMENT_TOKEN_TO_BE_REPLACED