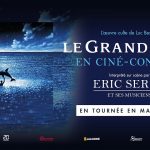 Le Grand Bleu (The Big Blue) directed by Luc Besson is one of those films that left a mark on me when I was growing up. I first saw it the year of its initial release (1988) in Paris on 70mm at the now defunct Kinopanorama. It's a visually stunning film, so being able to see it on the gigantic screen on 70mm made for a great experience, one that has stuck with me for more than … END_OF_DOCUMENT_TOKEN_TO_BE_REPLACED