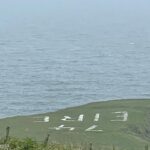 Ireland was officially neutral during the Second World War and the Irish government referred to the war as "the emergency". But part of the island of Ireland was at war and physically we are very close to the UK, so there was always a risk that German pilots could get confused about which country they were over. And so the Irish government set up the coastal watch to … END_OF_DOCUMENT_TOKEN_TO_BE_REPLACED

I just visited the Carlow website. It's horrific. It's embarassingly bad.Why can't they do something like Clare or Donegal?Does a county have to rely heavily on tourism to have a decent looking website?I'd have thought not.Earlier this week Carlow decided to have a carfree day before the rest of Europe. Whether this was a good idea or not isn't important, but if you were a … END_OF_DOCUMENT_TOKEN_TO_BE_REPLACED